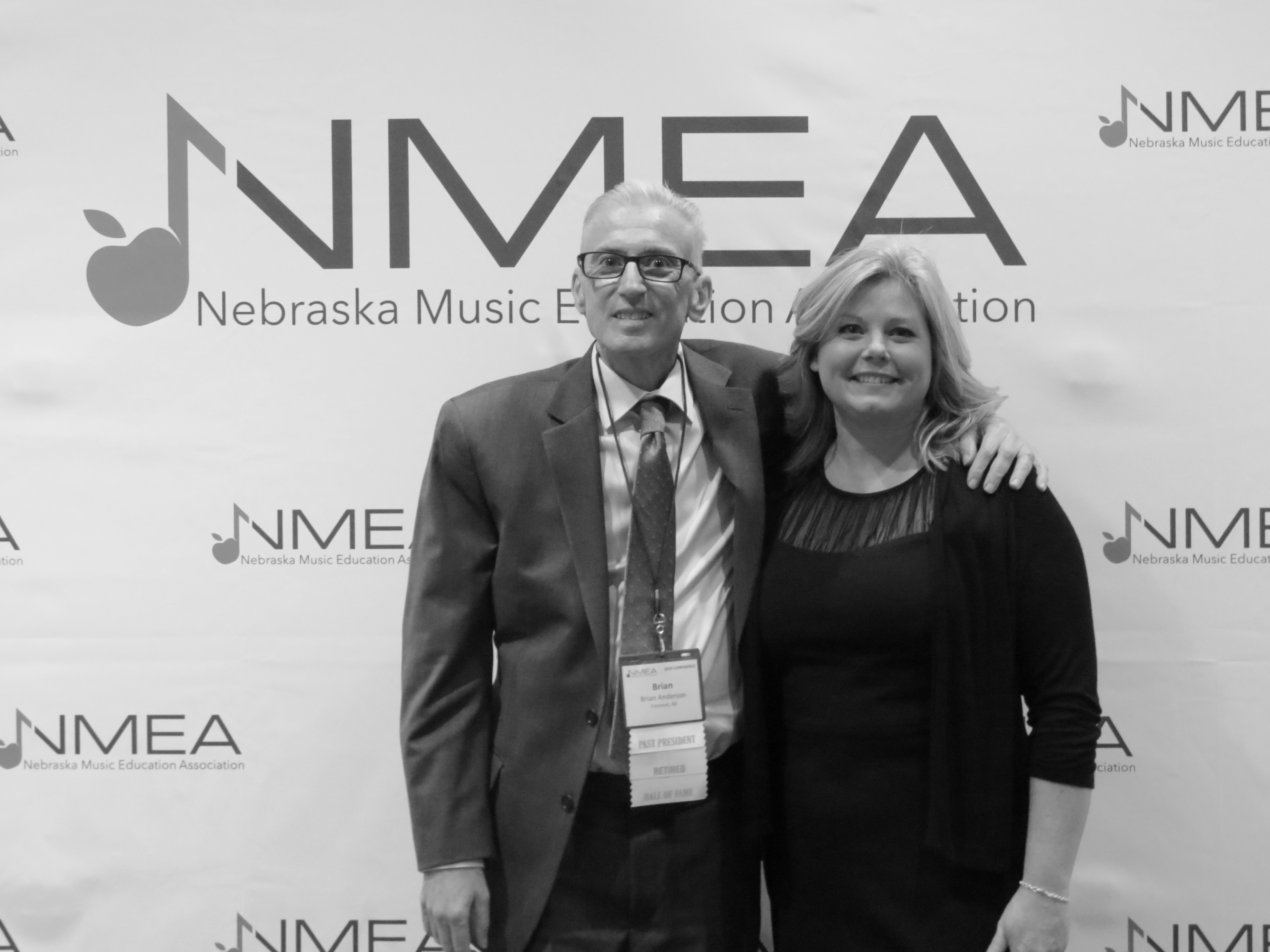 LINCOLN, NE (November 25, 2019) - The Nebraska Music Education Association (NMEA) is proud to announce the induction of Dr. Brian L. Anderson as the 112th member of the NMEA Hall of Fame.

Brian Anderson spent his entire 33-year teaching career in the public schools of Nebraska. He began teaching grades 5-12 instrumental music at Milford and Albion. He completed his final 28 years as Director of Instrumental Music at Fremont High School where he taught Band, Orchestra and General Music classes. During his tenure, he also served as Chair of the Performing Arts Department.

Ensembles under his direction have performed for numerous state, regional and
national music conferences, including the North Central MENC Conference. With Dr. Anderson’s guidance and commitment, the Fremont High School Band was among the state leaders in the commissioning and performing of new works for concert band. Under his supervision and direction, the Fremont High School Music Department was awarded the Signature School Award from the GRAMMY Foundation for excellence in scholastic music performance.

Dr. Anderson holds degrees from Hastings College (BME) and the University of
Nebraska-Lincoln (MM., Ph.D.). He is a past President of NSBA, NMEA, and the Alpha
Theta chapter of the Phi Beta Mu honorary band fraternity. He is a featured clinician,
adjudicator, speaker and guest conductor throughout the United States and Canada.
In 2018, he was selected from an international pool of candidates as one of the first
Conducting Fellows for the inaugural Reynolds Conducting Institute at the Mid-West
Band and Orchestra Clinic, the largest conference of its kind in the world.
Active as an author, Anderson wrote the NSBA Commissioning Project and the
Nebraska State Proclamation for Music Education signed by Governor Ben Nelson. He
is a Contributing Editor for The Instrumentalist magazine and has had articles
published by the following periodicals: The Instrumentalist, The Music Educators
Journal, Teaching Music, The Journal of Band Research, The Nebraska Music Educator,
and NAfME.

He has received the ASBDA Stanbury Award, the NSBA Jack Snider Outstanding Young
Director Award, Distinguished Service Awards from both NMEA and NSBA, the Donald
A. Lentz Outstanding Bandmaster Award, the National Band Association Citation of
Excellence and the prestigious Legion of Honor from the John Philip Sousa
Foundation.

Dr. Anderson joined the 43rd Army Band in 1988 and was appointed
Commander/Conductor in 2007. In this capacity he continues to serve the Soldiers
and communities of Nebraska through music.

Induction into the NMEA Hall of Fame is the most prestigious award bestowed to NMEA members. Inductees must
have been a member of the Nebraska Music Education Association and the National Association of Music Education
(NAfME) throughout all or a greater portion of his/her career; had a significant career as a music educator; been an
elementary, middle school, high school or college educator; contributed to the overall success of music education in
Nebraska by being involved outside his/her own program; shown visible support of NMEA by regularly attending the
November NMEA Conference; and shown visible support of NMEA by agreeing to serve as an officer, committee
member, or volunteer.

The Nebraska Music Education Association (NMEA) is a voluntary, 501(c)(3) nonprofit organization governed by an
elected Board of Directors. Our membership represents all phases of music education in schools, colleges,
universities, and teacher-education institutions. Currently, NMEA has approximately 1,200 members from across the
state of Nebraska, and membership is open to all persons engaged in music teaching or other music educational
work. The mission of the Nebraska Music Education Association is to foster life-long learning and active music-
making by all Nebraskans.

Thanks to our Sponsors

University of Nebraska at Omaha